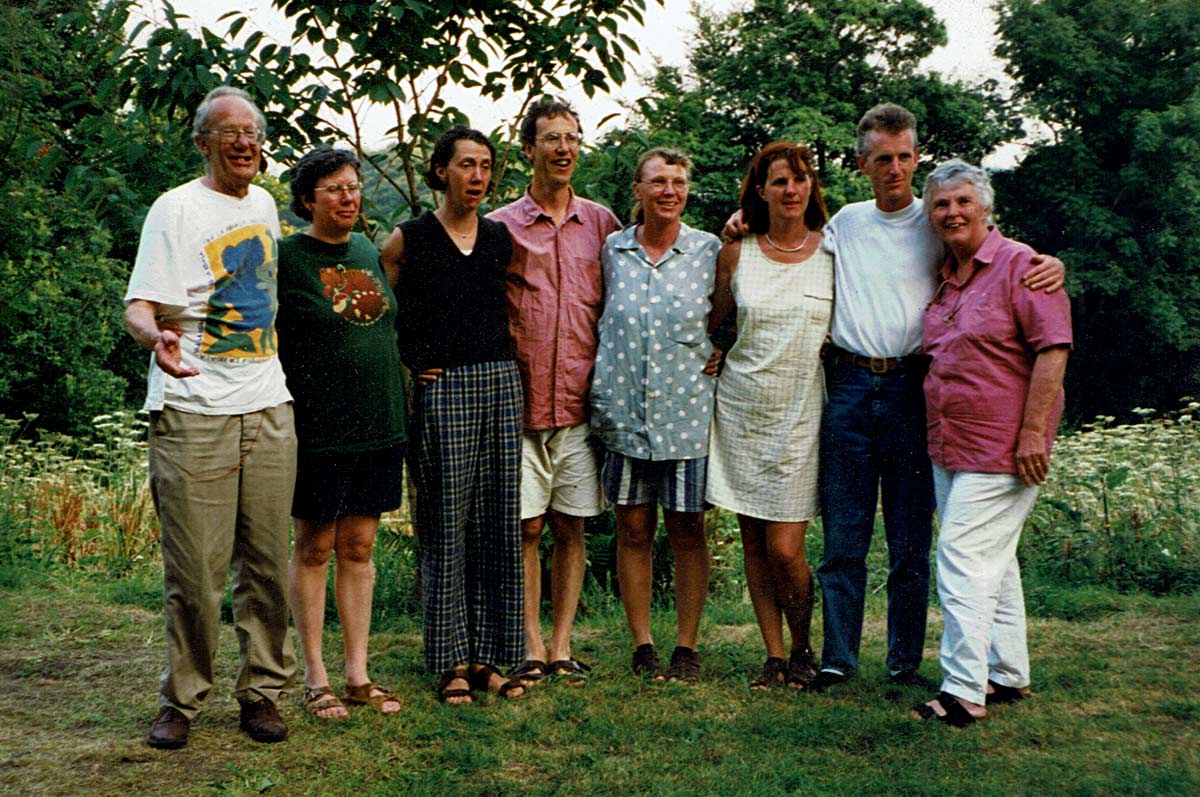 My Dad, Anthony, is standing in a field. A powerful feeling comes over him:
“This is where I’m meant to be!”
It’s his first visit to a farm. He’s 7 years old, on holiday with his alcoholic mum and industrialist dad. Up until now he has mainly seen built environments, like the Yorkshire mill town where his father runs production and design in the tweed works.

My mum… tells me she “was lucky.” “We got to see our mum for 20 mins almost every day. Not everyone did, but our mother insisted that nanny take us in to her at tea time whoever was visiting. Only if she was abroad or really too tired did we not see her”

My dad is alone in a street in Huddersfield (home) when he hears his name called. He turns but no-one is there. Looking around he sees a crucifix in a window. It is Christ calling him: “Will you serve me?” he asks. My dad is 14 and does not hesitate to say Yes.

My mum, Eve, is hearing the usual introductions her mother gives. “This is Anne my eldest. This is Ralph, my son. Here is Una my youngest and this is Eve my middlingest.” Though she knows her mum is trying to be kind by adding an …est to her place in the family she learns to accept that she is nobody special, just here to be ‘someone’s something.’ And, indeed, spends the next 60 years being daughter, wife, mother, and only sets out to discover a really independent identity in her 60s.

Mum went to Michael Hall School. Her parents adopted Anthroposophy with gusto following an Ita Wegman summer school in the 1930s. Mum met dad just after the war when he was following the BD lecture circuit. He pursued her for 3 years before she agreed to meet his parents.
When she does, Anthony’s father sets her a test: “what colour is this piece of cloth?” he asks, handing her a piece of subtle grey tweed. Looking closely, she confesses she cannot really answer as there are many different coloured threads in it. “Yes, seventeen colours” he says. “If you’d have said grey, as most do, I would have suggested Anthony find someone else”
My dad was always Anthony. Never Tony.

0.5 There’s a photo of me reading a paper at less than a year old. It shows me round as a ball, round head on top, holding up the paper miraculously and surveying it critically. In this you can see that I had good intellectual stimulus, good food and enough peace in my life to grow fat and round. Life was good in spite of the worrying.

3.5. From this point on I learn about who I am by listening in to mum’s conversations. If I do not look at her, if I keep quietly busy, she will tell friends things she would not tell me. Clearly, because I am not articulate, she believes I do not understand longer sentences. It turns out that I was such a problem that mum consulted a child psychologist about me. The psychologist tells her that I need more love. Mum is utterly defeated.  Committed to giving her kids far, far more than 20 mins a day she still cannot abide physical contact. I hear her confess that if we put our arms around her, she feels strangled. Even around her legs.

4.5 Dad was off saving the world. Bio Dynamics, Wholefoods, Anthroposophy, Love as an active principle in an intellectual world. He started companies, imported top quality Holle brand Swiss organic Baby foods and lost money substantially, tilting at windmills long before they were weakened with public awareness. We hardly saw him.

4.5.  I am miles away from home, maybe 1000yards! This quiet pool in the brook supports my dreaming. Though hidden behind a copse of trees it’s in plain view of the golf course and maybe 10 feet across with a tiny island in the middle. Mum has brought us all out to play in the sun. clay, water, gravel and grass make the perfect play place. We come here often, there is much to keep a child busy.

7.5 My best friend Adam lives less than half a mile away. I’m allowed to go there alone. Bracken and overhanging bushes line the rough track to the last houses on the heath’s edge. In the winter I learn that torches make the dark more scary, in summer I learn that though I may be up and out with the sun others do not want their doorbell rung at 5am.
He and I love to do cycle-leaps in and out of the old bomb-craters from the war. We are strongly advised not to pick up any old metal we find, children still die from unexploded grenades and such WWII ordnance each year.

8.5 With my sisters and brothers we build bracken dens out on the heath. Just under the edge of the forest the bomb craters can be covered with sticks and bracken laid over to create a house big enough for three or four kids. A whole summer can pass in a week of such wild-play.

18.5   Working in a pub I find myself getting unaccustomed levels of positive feedback. Someone compares my general positivity favourably with their experience of ‘other people.’ Reflecting on this seems to improve the situation and the positivity grows and grows. I have the feeling that I have reached some level of soul perfection and bask in the beauty of this. A friend diagnoses a moon-return and I recognise the concept of a doorway through which the intentions of the soul flow. The feeling lasts 3 or 4 months.

Days and nights my mind is torturing me. Every bit of carefully trained thinking is now focussed on the things I have done wrong. Things I could have done better to make that marriage work. Things I should not have done. But even more, things I should have done better or should have tried.  In VAIN I tell the mind that I did do those things and that I did my level best and could, really not have done any more than I did do. It just wasn’t possible. The mind is not listening.
My wife is running a quiet popular-opinion campaign and most people are shunning me. Three people only, who know her and hear her still support me. One says “I saw your flame burning lower and lower. I am really glad you left. I feared you would have got ill, seriously ill.” I choose to let the campaign run.  It would be more painful to enter the battle than to walk alone.

In a meditation, dreaming, I see myself chasing that slack bastard whose been occupying my life. He’s right there, hiding behind me. His weakness has got me into all sorts of trouble and I go after him. I’ve got a big sword. He dodges around my body, I chase him. Suddenly I get a glimpse of him.  –  It’s   that   baby.

I am walking out on the high moor basking in the full sun of love that pours from the delightful woman next to me. Astonished that I am not alone for the rest of my life, I am bewitched by her charms, made new by her love. Halfway down the trackway around Benchtor, I noticed that we were being followed by invisible beings. When they were still behind us some miles later I accepted that they were not local elementals but unborn children and asked if she had noticed them. There followed a brief conversation with the invisible ones in which they identified themselves as a boy, eagerly pushing to be born and another, possibly two more, shy, gender unclear but also warmly looking forward to being part of our family. I was nervous of taking on another family and asked them to give us time to build a relationship first. The boy was already clear when his best birthdate was, (though he didn’t name the day) and he was not up for any delay. As his mum was an astrologer, she could accept this and he was born the very next summer.

63/64. Orders continue to flow in and no offers-to-buy appear. The bowls we make are bigger and, in some ways, better than ever before. Some Joy and enthusiasm return. The books stall. A chain of care-homes starts to place multiple orders. The trainee/graduate leaves to set up his own studio and I continue to make.

The mood of this life so far seems best carried by a few lines from T.S.Eliot

We shall not cease from exploration
And the end of all our exploring
Will be to arrive where we started
And know the place for the first time.
……
Through the unknown, unremembered gate
…….
Is that which was the beginning;
The voice of the hidden waterfall
And the children in the apple-tree.

And the fire and the rose are one.

Freedom and the Pendulum of Awareness

There are basically two types of human experience: The sense impression and our response to…

The Lords Prayer and the Celtic Cross

Performing Our Father with the hands as well as the voice. Prayer is one way…

Bringing the Spiritual Search back to Ground Everyone is on a spiritual path. Whether they…