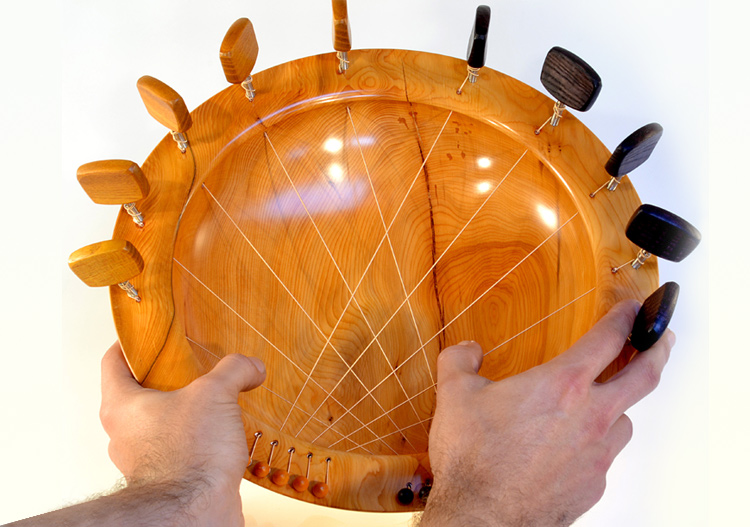 Largely based on a musicians handbook with additional material added this article is intended for Sounding Bowl users exploraing the modes.

You can understand the modes by seeing them as a succession of intervals. A scale is succession of notes, and must always begin on its named note. A mode can being anywhere and follows its own unique interval sequence to create the mood that its name implies.

The ancient Greeks looked at music this way. Later, the early Christian church adapted this classical influence to create the Ecclesiastical Modes. Much Renaissance and Elizabethan music is also modal, witness early tunes in the Oxford book of carols.

The second point of difference is in our use of the modes. Early modal church music was vocal (therefore melodic). Thus the modes’ unexhausted harmonic possibilities offered 20th century composers a valuable means of freeing music from what Bela Bartok called the “tyrannical rule of the major-minor keys” (tonality). Of particular interest to the Sounding Bowl user is the mood created by modal music. In the same way as Bartok and other twentieth century musicians want to escape from the rigid walls of Doh Ray Me tonality, the Sounding Bowl user can open up the emotional landscape of sound by avoiding the established key system. Understanding what follows here and playing with modal melodies and harmonies creates new perspectives on music.

So let’s group scales and their usage:

Scales used by tribal cultures across the world. Most popular today in their Hebridean, (major) Balinese 1st Minor) or Japanese, (2nd Minor) tunings.

Basis of music in the Middle Ages and Renaissance (Gregorian Chants to Palestrina).

To begin an understanding of the modes it is most useful to relate them to the major and minor scales we know. Example 1 shows all the modes as they appear in the key of C. Notice where the half steps occur. Most beginners use this method to learn the modes, e.g., Dorian is a C major scale starting on D; Aeolian is a C major scale, starting on A, etc. this is a good place to start for the pianist and gives a chance to play and improvise in the modes without losing oneself in the thinking.

To assist this approach for the Sounding bowl player I have created the tuning chart setting each bowl into the various modes. On larger bowls, 10 string or more you can still play a bowl set into a given mode simply by starting on a different string.

You can for example, treat the instruments home key as if it were the C scale illustrated here. Thus tuning the bowl to the “Ionian/Major” in your chart you can find the Dorian starting from string 2, Phrygian from string 3 etc as in example 1 here. This underlines the structural relationships of the modes

To graduate from beginner, however, one must learn the modes as individual entities instead of continuing to do this two-step associative thinking (knowing something by relating it to something else). For this to begin we must analyse the full tone and semitone structure of the modes and scales. Major/ minor scales all have the same Do Re Mi structure. In the major scale the semitones occur on the steps to the fourth and the key note, in the minor to the third and the sixth. In Example 1 the semitones are shown with a linking bar to highlight their location.

In Example 2 the modes are each shown beginning on C thus highlighting the semitones by the use of sharps and flats to create them. Each one is also marked with the key or “pitch” normally associated with those sharps or flats. From this point on the use of this document to a player having only a Sounding Bowl is academic but can help to increase the grasp of the system. It may be more useful to find some mediaeval or renaissance music or to improvise within a given modal structure and thus gain a feel for the nature of each mode or review some of the videos on the site here. Even so I include it here for those who wish to develop their understanding on all levels.   In this example arrows are used to show the notes following a semitone, these tones give the characteristic emphasis to each mode.

Now you can practice to your hearts content. Feeling the mood of each mode, strange to the ear trained in the fixed relationships of the major/minor keys yet liberating to the moods within music in a whole new way.

Sounding Bowls are typically supplied in either pentatonic or modal tunings; 9 strings in Mixolydian, 10 in Aeolian, 12 in Phrygian, 15 in Aeolian or Dorian mode giving flexibility around the Major/minor scales within. The tuning chart gives you full flexibility to adopt a wide range of other tunings, modal, scalar, harmonic (for larger Lyre Bowls) or pentatonic (for Lyre/Melody Bowls of 10 string or less)

I hope this serves as a usuful introduction. In the end the very best way of learning is to play. That is the secret of Sounding Bowls, Play, childish play is what creates the Joy.

Apps for Phones and Tablets.
you can get tuners, keyboards, all sorts of music making aids and apps. and many are free. These can help with finding your way in the ups and downs of music.. Some let you to play a keyboard. Most of these do not make a good sound but they do make it easier to understand up, down, sharp and flat in the scales and the modes.
Of the various I’ve tried “Keyboard Piano” and “Learn Piano” are useful ones.
Others work as tuners with a needle scale and degrees of accuracy that make reading the scale easy. Of the ones I have tried that can be set to A=432 I like “G-strings Free” SkyBrierly, Chief maker here at Sounding Bowls uses “Pano Tuner” (sic) for i-phone.

Notes are created by tensing a string or blowing a column of wind.
To understand that the notes we use are not arbitrarily chosen it helps to understand this:

Halving the string or flute length creates an octave, the same note only higher. this can be done simply by touching the string or by using a neck as violins and guitars use. Flutes use holes.
Touching the One Third point creates a ‘fifth’ higher.
Quartering,  creates the second octave, fifteen notes higher
The 1/5th point creates the next musical ‘third,’ 17 notes up and so forth.
The notes we use continue this process for 12 octaves then transpose each of the notes down to become a division of the octave, notes within rather than notes above the first octave. The third and fifth have come to be called this due to their placement in the major scale.

If you wish to go deeper into the celestial beauty of the structure of music I recommend Wooden Books, a Little book of Coincidence and The Elements of Music are the most relevant amongst their many fascinating titles.
If you wish to get really esoteric I recommend Expanding Tonal Awareness by Heiner Ruland or Intervals, Scales, Tones by Maria Reynolds

First steps into play with a Sounding Bowl focus on listening. Listen to each note,…