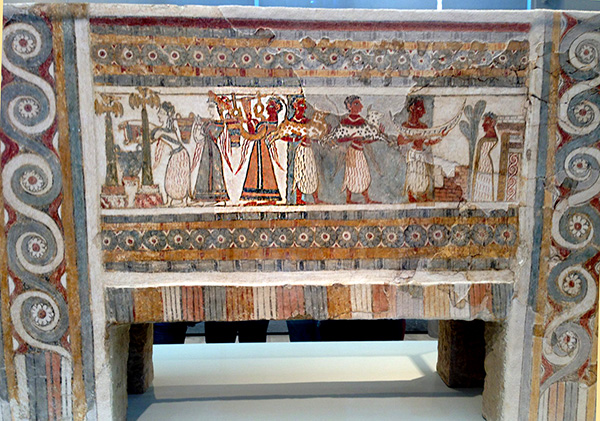 Where to Sounding Bowls come from?

Stringed Musical Instruments go back a long way. There is no agreed historic moment in which “The First Stringed Instrument” appeared, they have in some sense ‘always been with us’ and if you look back through European culture you can find at least two distinct mythic origins of what we now know as plucked and bowed stringed instruments.

Do Lyres come from Ancient Greece? Most of us know they do, yet before the Greek culture rose into what we know today as the source of democracy, philosophy and literature the Sumerians were playing simple lyres and haunting tunes.  Ancient Greece saw a distinct development in the Lyre such that Ancient Greek Lyres are  still made today.

The ubiquitous plucked stringed instrument today is the guitar, its development since electronics creating something barely recognisable to the Spanish tradition and again we have to ask did the Guitar really come from Spain? At what point, for example did fretted finger boards first appear? The Africans have a huge tradition of musical ingenuity and they have used chords tied around a finger board to define notes since before we Europeans began raiding them for slaves and ivory. Did the Lyre spread from Sumeria, through Ancient Egypt down into Africa, get developed and come back up through Spain? And even if we were able to track this would that mean that the mythic origins of such instruments were mere fables? Surely we can see in these myths explanations of the origins of music and instruments that anthropology can barely hint at. There are mysteries within music that some branches of science may have learnt to respect but none have begun to explain. Is it thus a mystery that Spain and guitar are almost synonymous, or that players like Segovia have achieved mythic status.

The more we look back into the origins of culture the more we find ourselves involved in myths rather than history. Indeed, given the Darwinian slant of the 20th century mind there is little likelihood of our finding meaningful appearances of culture without taking some mythological interest. The simplicity of early instruments is too easily interpreted by the intellectual mind as further evidence of its own superiority whereas recreating such early instruments and playing on them the tunes we find inscribed into early stone tablets produces a haunting effect that leaves the intellectual mind gasping for reasons, unable to figure.

Far away from Greece and Sumeria the Finnish mythology has two distinct stringed instrument creation myths, one of a harp like instrument from the jawbone of a massive fish, the other of a zither like instrument from the tree that also became a lover. These are common myths in the assumed origin of the Kantele. One might also ask if this image of strings stretched across a massive jawbone may not be an image behind what we now call the Celtic harp? The smaller Kantele also bear distinct resemblance to early church zithers yet to assume a connection is to take a material slant and ignore the very spirit of the music itself. Make this mistake and we lose all music, for without origins in the other world, in spirit itself music becomes tradition, repetition, cleverness. Watch this ancient Finn playing Kantele, you can see in his eyes he is looking beyond the physical surroundings. Particularly at 0:40 and 16:40 but also many other moments. Such a connection to the otherworld is something any true musician is familiar with.

You could argue that Lyre creation myths of Ancient Greece bring us one aspect of European music while Kantele creation myths of the far north bring us another and that African and Arabic myths and associated instruments coming up through Spain have fed richly into this tradition. Who can ask where did the African Kora come from and whose idea was it to split the tuning into two sides without reference to the mythology of the region? Or how the Chinese Guangzhou expresses that culture without understanding the link between music and the gods that also form the culture itself. The issue must surely lie in this: We have forgotten who the gods are. I am not suggesting that we return to an age of fear and superstition but rather that we begin again to realise that there are forces moving through cultures and individuals that are larger than either.

We see in the known history of inventions how most big ideas came to more than one person at the same time. Lightning rods being developed in the USA and in Russia simultaneously, Einstein discovering that his theory of relativity was about to be released by another man who was two weeks behind his calculations. Maybe the lightning rod is an image in itself, ideas coming from a tension between earth and sky whose release lights up the world, whose brilliance is funnelled into one channel creating an ‘invention’ that changes the world.

The modern world has reached an extreme of individualism in which we believe in the uniqueness of invention, the individual attribute of genius, yet at the same time we deny the possibility of creativity by suggesting that everything is learned, that a musical instrument must have been passed from person to person, from culture to culture. Mythology is clearer. Hermes created the lyre from a tortoise shell strung with the guts of a cow. This image explains in a way no history could how music is connected with pain and loss. The tortoise has died, his frame is hollowed out (feel that image.)  The cow has been sacrificed, only the guts remain. Twisting the dried guts, stretching them across the shell and out to a frame Hermes makes music that so enchants his father, from whom he has stolen the cattle that he is forgiven. The power of music and its origins in the sufferings of life and death are visible there as they are in the Finnish myths where the Jaw bone is taken from a massive fish that attacks the hero as he is creeping up on the north-witch to get from her a stolen mill, a sort of cornucopia. With the jaw-bone harp he is able to lull the witch to sleep and regain that which provided goodness for his people. These themes of making beauty out of adversity are common in musical mythology and tell us clearly that music and musical instruments come from what we as people do with the suffering that life entails. Hermes as a character has a staff or sword wreathed in serpents. These two serpents lent their helical dance to the image we now know as the DNA spiral yet we forget the role of Hermes in medicine. Is not a teaching in itself that Hermes is the god of both trickery and of healing, of trade and of theft.  Living in a culture where a massive amount of international is in selling drugs at huge profit we have forgotten the meaning of this God who is also the most phenomenal musician. How poetic is that? He himself must be grinning all over.

We as human beings are constantly in balance between our nature and our culture. Music comforts death and loss in a way that nature herself cannot do while nature provides comfort and food in ways that culture cannot. We who are beginning to panic over our destruction of nature and awaken again to our need for her are still in denial that the inner experiences of being human are more than chemical events, denial that there are gods in our music and in our art, gods in our politics and in our poetry that we ourselves are not master of. Whether we can eventually grow to be equal to the gods is another question and respect for hubris restrains me from attempting that one here.

Hermes is a Greek expression for a force that moves through human psychology, a force greater than the human being and related in Roman mythology with the planet closest to the earth, the plant Mercury whose pattern as it circles in our vision is the most complicated and traverses the most distance to and from our vision. Such an image of super-human forces lies behind all music. In simpler speech music comes from ‘heaven’ and musical instruments each have a god or an angel speaking through them. Each instrument has its own ‘voice.’ Each culture has created a musical tradition with its own voice. Each great performer develops their own sound on whatever instrument they use. What is needed for a person to make good music, or to make good musical instruments is an understanding of their own trials, for within human struggle lies inspiration. The image of the hollowed turtle strung with torn guts, the image of the hero struggling upriver to confront the witch of dark and cold are images of this facing into the wind of one’s own trials. From this source true music is made.

If we look solely into this world we can safely say that Sounding Bowls come from Devon, England. We can point to the ways in which Sounding Bowls are unique, not like other stringed instruments and we can point to a history of open stringed instruments going back to Sumeria at the very least and maybe to the reindeer herders and hunters of the snowy north. Yet this does nothing to tell us about the profound effect Sounding Bowls have, of how the Kantele speaks of wild, open spaces, different to the lyres that carry Greek feelings of elegance and balance, of the classical guitars description of Spanish passion or the Hurrian Hymn to the Moon that carries such strong feelings of another cultural world altogether

If we look at the fact, altogether different that the image of a bowl with a string inside first occurred to Tobias during a meditation and the fact that the curves that give this particular harmonic pattern arose through an attempt to create sculptural forms that could create visual lightness without implying cold, yet present as a warm, embracing form that did not suggest sogginess or heaviness we glimpse another world entirely. Here it matters nothing where geographically Sounding Bowls come from, they come from holding the balance between extremes. They come from holding a question for years, waiting for the gods to speak answers, from patience, faith in the deep nature of being human.

In this sense Sounding Bowls come from heaven. As Greek Lyres come from Hermes, as Väinämöinen is the one true source of the Kantele, as music flows from beyond math and re-interprets our experience of the world communicating feelings and perceptions for which there are no words. Mythologically one might relate a journey to the meeting place of earth and sky, the gifting of a jewel from an ancient elder, the properties of the jewel show when looked through, the world appears as only beauty, all ugliness removed…  the return to the workshop where glances through the jewel reveal forms that could be made the sound of which would, like the view through the crystal reveal the beauty of the everyday world.

Since the ancient world has plucked on the strings of the heart music has reminded us of our deep humanity. The journey to find a jewel of their own is now made by many. Some of these have journeyed to this workshop and discovered in the way we work the wood, the way we see work itself, a beauty that touches on everything. These are now journeying home, these are now setting up workshops in Austria and the USA.

Wherever Sounding Bowls may have come from they are now available internationally. Maybe even from a workshop near you.

An art of Meditation

Introduction  The simple philosophy behind the Sounding Bowls is one of Presence. If one is…

In 1991 I met a Native American shaman posing as a peace worker, leading community…