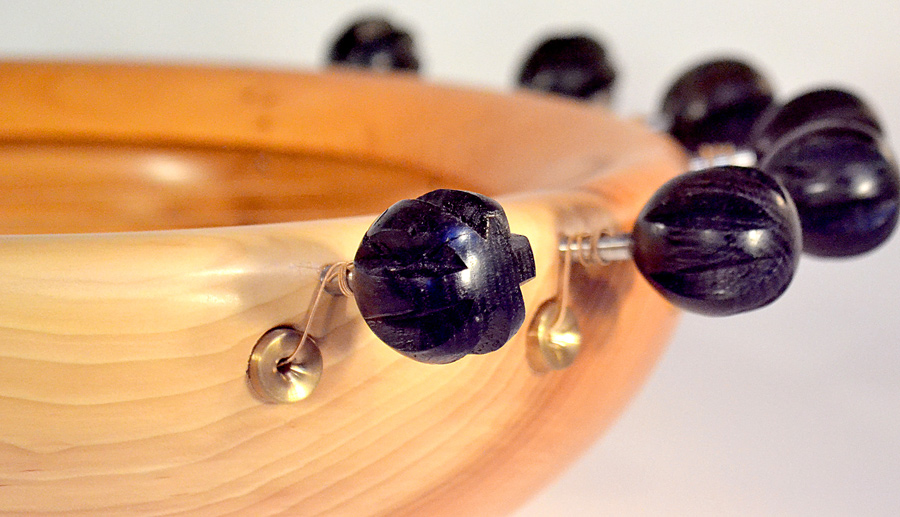 Music is sound given order.

Notes are the first ordering, purifying sound into individual pieces and harmonic sets.

The notes of the traditional scale are created by changing the length of an open string by touching it.

A centre touch, halving the string creates an octave, (the same note only higher.) Touching the 1/3rd point creates a ‘fifth’ higher. Quartering, the second octave, the 1/5th point creates the next musical ‘third’ up and so forth. Third and fifth have come to be called this due to their placement in the major scale.

Rhythm is the second ordering of sound that creates music. A single note plucked with rhythm is musical. Multiple notes without rhythm are not.

Melody is a combination of notes played sequentially in a rhythm, sometimes called a tune.

Harmony is a combination of notes played at the same time.

Volume is the final element, feelings are expressed by loud and soft as they are by rhythm and note. More on this with further links within this page: www.britannica.com/EBchecked/topic/501914/rhythm

The most harmonious sounding intervals are 3rd and 5th with 4th and 6th close behind. The 2nd and 7th are called dissonant, while the gap between the 3rd and the 4th is also dissonant, a ‘semitone’. These names for the intervals are based on the 8 note octave, this is called a ‘diatonic’ scale.

Older ‘pentatonic’ music leaves out the 4th and 7th to create a scale that sounds good whatever notes you play together. Today’s ‘chromatic’ music considers the octave to have 12 notes, including the sharps and flats below as separate notes.

This means that a third is any five steps in the chart below and a fifth is any 8. I have coloured in the intervals in the c scale as example only.

Your Sounding Bowl is tuned in diatonic or pentatonic scales and does not have 12 steps in the octave as illustrated in the chart below.

Apps for Phones and Tablets.
you can get tuners, keyboards, all sorts of music making aids and apps. and many are free. These can help with finding your way in the ups and downs of music.. Some let you to play a keyboard. Most of these do not make a good sound but they do make it easier to understand up, down, sharp and flat in the scales and the modes.
Of the various I’ve tried “Keyboard Piano” and “Learn Piano” are useful ones.
Others work as tuners with a needle scale and degrees of accuracy that make reading the scale easy. Of the ones I have tried that can be set to A=432 I like “G-strings Free” SkyBrierly, Chief maker here at Sounding Bowls uses “Pano Tuner” (sic) for i-phone.

Notes are created by tensing a string or blowing a column of wind.
To understand that the notes we use are not arbitrarily chosen it helps to understand this:

Halving the string or flute length creates an octave, the same note only higher. this can be done simply by touching the string or by using a neck as violins and guitars use. Flutes use holes.
Touching the One Third point creates a ‘fifth’ higher.
Quartering,  creates the second octave, fifteen notes higher
The 1/5th point creates the next musical ‘third,’ 17 notes up and so forth.
The notes we use continue this process for 12 octaves then transpose each of the notes down to become a division of the octave, notes within rather than notes above the first octave. The third and fifth have come to be called this due to their placement in the major scale.

If you wish to go deeper into the celestial beauty of the structure of music I recommend Wooden Books, a Little book of Coincidence and The Elements of Music are the most relevant amongst their many fascinating titles.
If you wish to get really esoteric I recommend Expanding Tonal Awareness by Heiner Ruland or Intervals, Scales, Tones by Maria Reynolds