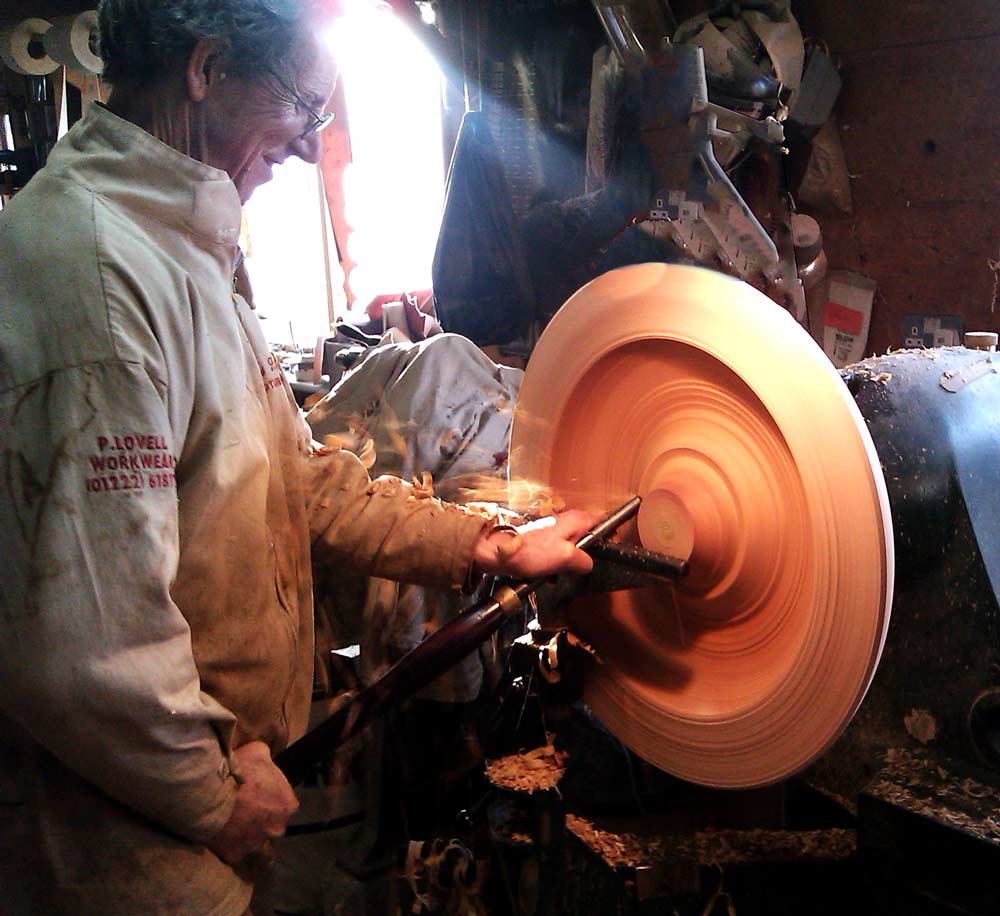 After the talk I gave at a conference in Bristol in October 2017 I was asked to summarize my life-story for the creative therapies group Arts4Health. Updated July 2022.

When I left school there was an element of despair in me. The world appeared a mad place to me, with unholy compromises required at every corner to even get a place to stand, never mind a living. After numerous time-fillers, I set out as a craftsman, becoming self-employed in my mid-20s.

As a woodturner, one spends one’s days making shavings. Something above two thirds of all the wood one handles goes into the fire, either as shavings or offcuts. The bits left over, if one has done a good job are beautiful to look at. If one has done a excellent job, the shavings themselves are light and curly, speaking of an ease in leaving the wood. Machines, today, make dense and sad shavings. Tortured wood, cut without care.

My first commercial job was a row of balusters for a night club. Not having much experience, I was not too cast down when the customer looked at the delivered order and commented: ‘Well, it’ll be dark, no one will see them.’ What he liked was the measly bill I tendered.

Bit by bit my skills improved and I began to sell pieces in craft markets as well as contracting to joiners and builders. After a while my feeling for form, my delight in the flow of good curves, began to show through my hands. Some of my work was elegant, balanced and sold in high-end craft galleries. This pursuit of grace, balance, dynamic poise became my pursuit, and though much of my work was, on a simple level fruit and salad bowls, it was the curves, the finish and the choice of beautiful woods that made the prices gained repay the hours I put in.

With this pursuit of flow and harmony, I become meditatively involved with curvature. Design in this industrial world has become too conceptual. Design in the craftsman’s hands becomes relational. Each piece of wood has its own demands for curve, weight and size and like a person offers different aspects of its being to different makers.

Craftsmanship, when truly practised, is a meditation, a Presence-exercise.  The flow of a curve as it emerges from the intention-led tool turns out to be about trajectory of intention, about reliability of character as much as about maths, hyperbolae or radius. It is as though the direction of cut is a statement of purpose and the final shape is the fulfilment of that promise. I felt it as a challenge to my sanguine nature to complete the elegance-potential inherent in the first cut-line. Two particularly issues mattered to me: Some curves add a feeling of lightness to a design, others seemed to add warmth or embrace. The curves-of-light seemed to create forms lacking in warmth and the curves of embrace seemed to create heavy, even soggy forms. It took some months of study and at-the-wood meditation before I discovered that spiral curves, applied in what my colleagues would have called a reverse or upside-down approach, created forms with both lightness and warmth. This breakthrough led to another – Slowly I began to notice that the bowls I now made had inner acoustic richness and the more refined the spiral curves the more exciting the resonance became. It was clear that I needed to do something to bring my customer’s awareness to the enjoyment of this sound-space. What actually happened, many months later, occurred during an evening meditation. As an interruption to the mantra I was attempting to focus on, an image appeared before me of a bowl with a string stretched inside it.

I then began to experiment with fitting strings through the side-wall of bowls. Somehow the inside, ‘through the middle’ bit appealed. Leaving the rim clear to run a finger around, making the presence of the strings that little bit more subtle, both offered artistic satisfaction.

The art and craft galleries I had been supplying felt unable to sell these. Somehow the auditory and the tuneable aspects put them off and dusting underneath strings was a final straw. One of my regular customers added the very first strung bowl to his collection and reported remarkable peace from playing it, as did his wife, but it was only after over 20 versions had been made and the idea was beginning to settle into the forms we make today that music therapists started to buy them.

The first placement was into the NHS with a hospice in Oxford buying one for their new, experimental music therapy dept. The therapist there was struck, on day one, with the immediacy of response and emotional clarity evoked and asked me to make a larger one. He soon asked me to contribute to conferences, and so, the NHS became my best customer. Since then I have had regular feedback. For years I genuinely believed that music therapists just like to give complements. Eventually I had to accept that where other instruments may not reach a client a Sounding Bowl will, and that where another instrument may ‘allow musical interaction’ a Sounding Bowl “facilitates a depth of emotional engagement” beyond the expectations of most music therapists (as the director of the Cambridge MT training said.)

Today chains of care homes choose Sounding Bowls for these reasons, ordering dozens. Hospitals report that where most music therapy calms but does not heal Sounding Bowls cause effects visible on the bodily monitors.  And where individuals are sunk in a round of daily despair, unresponsive to interventions, Sounding Bowls can bring moments of joy and of real human connection.

Occasionally a report stands out. Elsa Tanina Ouabdesselam volunteered for some years at a neo-natal intensive care unit in France. Working with newborn babies struggling against inherited disease, many with fading vital signs, Elsa would hold her little 7 string Sounding Bowl against the incubator such that the vibrations carried right through the infant’s space. Immediately, the heart monitor would show a strengthening and regularizing of the heartbeat. The breathing monitor would show stronger, deeper, breathing. The blood oxygen monitor would rise steadily and the baby’s muscle-tone would relax, soften. Over the few years that Elsa was volunteering here, hundreds, literally hundreds of baby’s made the change from “fading vital signs” to “in recovery,” often following a mere 20 minutes with a Sounding Bowl.

There are many mysteries in our world. For me this is one of them. How this acoustic curve, stringed and tuned can touch something so profound in the life of an individual that such corners are turned. Delight, amazement and gratitude are my daily companions. Indeed making Sounding Bowls has transformed my life. From being wood and shape focussed I have become sound and awareness focussed. Music that I had played with as a child and a youth re-entered my life through the medium of form. In place of supplying rich customers with decorations, I am now supplying healers with effective tools. The difference this makes to the working day is massive. No wonder young men come to train with me, this work is inspiring. There are now Sounding Bowl makers in four countries. There are chains of nursing homes and larger charities starting to put in repeat orders. There is awareness of their effects in top universities, Oxford, Cambridge, London. Sounding Bowls became mainstream, clarifying my life’s mission.

Running experience-days for music therapists expanded into regular short courses for owners and would-be owners. Here I could not avoid noticing how a day’s play changed people’s consciousness. The deepening and opening up that occurred had profound effects. People would report the sound resounding in them for days, occasionally months, afterwards. People had profound experiences of joys and sorrows of times past merging and emerging with the sounds. People felt their best-selves coming to the fore in rare and treasured moments. This persuaded me to shift the emphasis towards personal development and healing. For a few years my partner, Wilhelmina, and I ran 1,2 and 3 day courses in growing through meeting self-in-other with Sounding Bowls as a peripheral aspect. These were set around the UK, in Europe and the USA.

Lockdown and Covid op were deep experiences for everyone I know. Here, the skies and the roads went silent, neighbours who normally hurried past lent on the wall to chat, friendship and connection  blossomed. I sat out in an extraordinary warm spring, amazed at how the world had come to a halt. Even I, who had no reason to stop, found myself wondering if, really, I had retired already. Something about this time had millions asking themselves what they really want from life. Many of those who were not paralysed by the fear narrative made big changes. House prices shot up, People too up gardening. The hidden paths in the forest became more firmly walked, wild swimmers appeared at hidden pools on the river… and Sounding Bowls started selling faster, stock dwindled. One of my graduated makers came back from an engineering project and started making again.

My own meditative life found a fresh energy and requests for teaching saw me giving classes in personal development and 1:1 advice on screen-links. A new apprentice began here in June, James is keen to gain knowledge and skills in Anthroposophy as well as Sounding Bowl making.

Then calls came to teach inner development more extensively. Local people began to ask to work with me, international schools wanting classes on Steiner’s path. Then the clear ask, in a meditation, to unfold the Foundation Stone meditation into a foundation-year class.

In 1991 I met a Native American shaman posing as a peace worker, leading community…

Why do this course? Meeting another human being is the best, and the most difficult,…